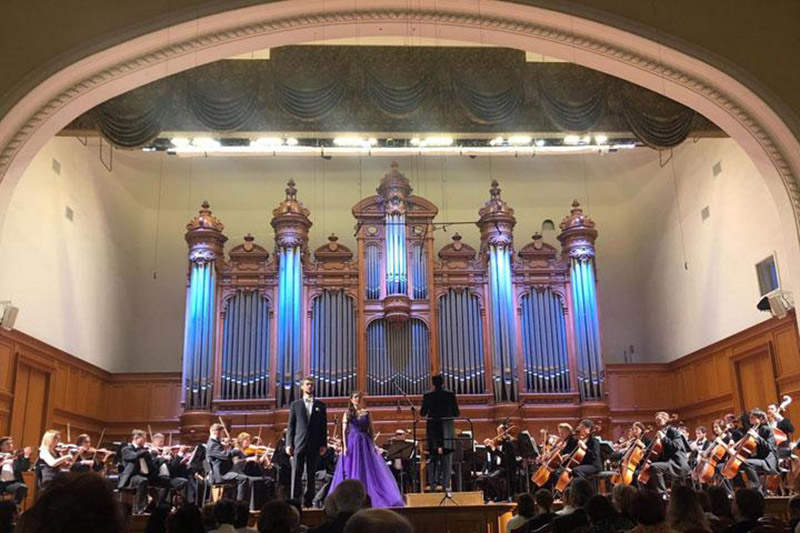 The day before in the Great hall of the Moscow Conservatory. P. I. Tchaikovsky held a solo concert of honored artist of Khakassia, winner of international competitions, as well as part-time Chairman of the Community of Khakassia Ekaterina Monisova (soprano)"Golden collection of Opera masterpieces". 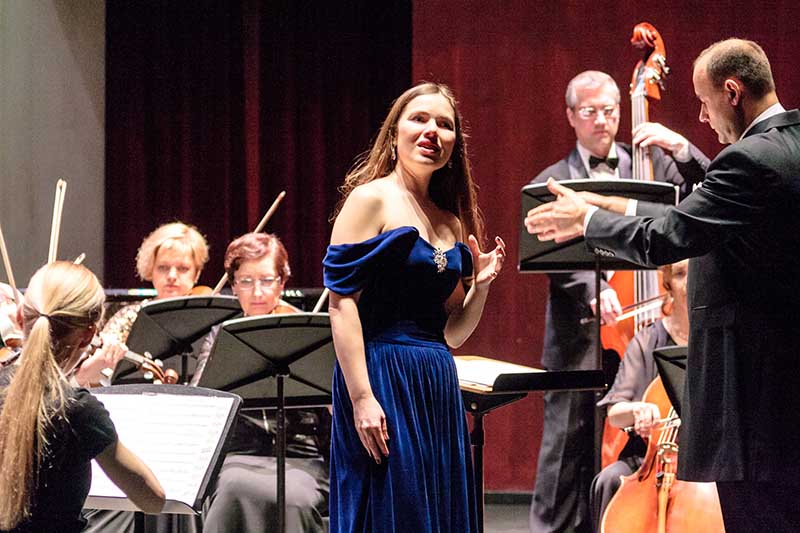 Start of the interview in the news at the link..

Monisova’s recital was held on December 25, 2015 in a beautiful historic mansion of Prague – the Palace of Liechtenstein – with the participation of Jihočeská Filharmonie (South-Bohemian Philharmonic Orchestra) under the baton of Leoš Svárovský, one of the most famous and influential of Czech conductors (nowadays chief conductor of the Aichi Central Symphony Orchestra Nagoya and principal guest conductor of the Slovak Philharmonic). 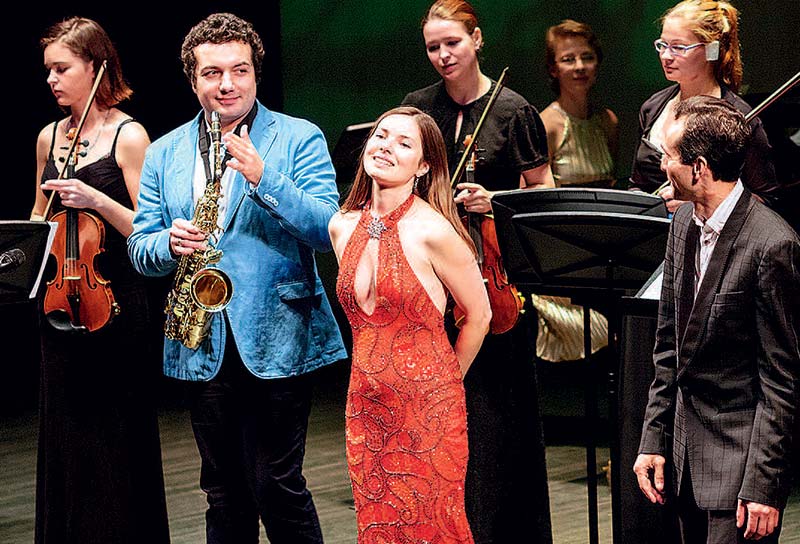 Monisova didn't simply sing accompanied by the orchestra she set the tone that determined the style of the concert. Visually delicate singer is endowed with a rare appearance on the density and saturation soprano, effectively "manipulating" it, she scattered crystal beads of the baroque grace, then rose to the tragic pathos of classical opera, suddenly took on its pure jazz vocal performance.

E. Monisova performed arias Cleopatra and Almira from Handel's operas "Julius Caesar in Egypt" and "Rinaldo" Gavotte Manon of Massenet's opera of the same name, and Juliet's Waltz Gounod opera "Romeo and Juliet" (opera "calling card" of the singer), vocal compositions by Gershwin ("My love!"), Kern ("Smoke"), Bernstein (Mary's song from the musical "West Side Story"). A logical conclusion of the concert was the favorite work of the singer - Lullaby of Clara («Summer Time») from the opera J. Gershwin's "Porgy and Bess", once again confirmed the high level of performance of the young singer and her ability to excel in music, no matter what era it belongs to.

"...Ekaterina Monisova certainly has an expressive, colorful soprano, perhaps a little deeper and thicker than that you expect from an enlightened Baroque music, but generated by "Eccellente" and his musicians created nature of performance, especially in a duet D'Astorga, effect of improvisation and glitz. So, initially declared in the program of the concert two popular opera arias - Violetta and Gilda from Verdi's "Traviata" and "Rigoletto" - perceived gifts and "encores" final of the first part of the concert".

"... Finely and tastefully sung vocal miniatures Purcell, Vivaldi, Handel's singer Ekaterina Monisova, the owner of a beautiful soprano voice. She also likes to act with “Eccellente”, able to support and pass the old flavor of music eras. Particularly exciting in its interpretation of the famous aria Dido sounded from the opera "Dido and Aeneas" Purcell ; tragic “Remember Me” («Remember me») literally brings tears to the public..."

A rare opportunity to “talk with opera divas before they became divas and become inaccessible” - gave to its guests the Russian Ambassador in the US Sergey Kislyak. Together with the Washington National Opera, running by Placido Domingo he arranged reception at his residence for the organizers and participants of the traditional Opera Ball in the U.S. capital. Performed at the reception the young soloists of the Moscow Chamber Music Theater «OperaPiccola», created by a production center "Opera" soprano Tatiana Кoninskaya, Ekaterina Karpova, Ekaterina Monisova convincingly proved that they were not in vain called "future stars".

"... The American soul could not respond to the sultry "Summer time" by charming Monisova. However, if you believe the music directories and unforgettable melody inspired to George Gershwin by Ukrainian lullaby. The Washington refined audience applauded from the soul". 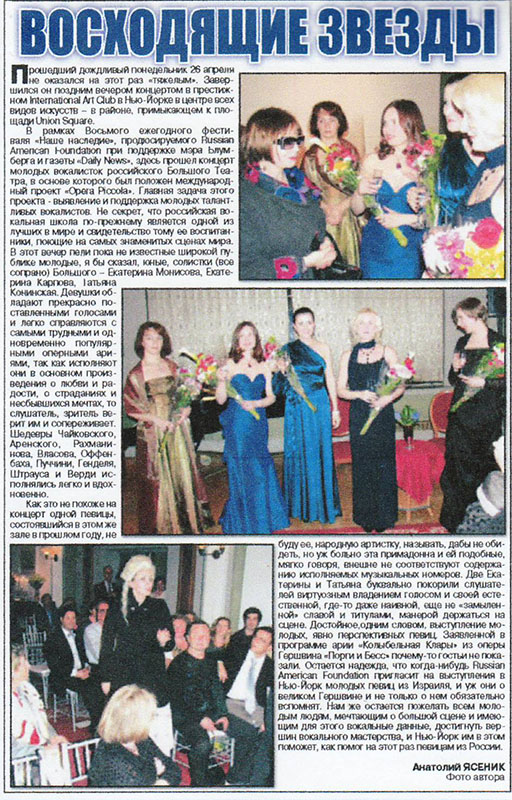 Past rainy Monday April 26 was not at this time a "heavy". It ended late in the evening by the concert at the prestigious National Arts Club in New York in the middle of all kinds of art - in an area adjacent to the area Union Square.

As part of the eighth annual festival "Our Heritage", produced by Russian American Foundation supported by Mayor Bloomberg and the newspaper «DailyNews», here there was a concert of young singers of the Bolshoi Theatre of Russia, in which was based on the international project «OperaPiccola». The main objective of this project - to identify and support talented young singers. It is no secret that the Russian vocal school is still one of the best in the world and the evidence that her pupils singing in the most famous stages in the world. This evening singing is not yet known to the general public, young, I would say, young, soloists (soprano all) Ekaterina Monisova, Ekaterina Karpova, Tatiana Кoninskaya. Girls have posed great voices and can easily cope with the most difficult and at the same time popular opera arias, as they basically perform works of love and joy, suffering and unfulfilled dreams, the listener, the viewer believe them and empathizes. Masterpieces of Tchaikovsky, Arensky, Rachmaninov, Vlasov, Offenbach, Puccini, Handel, Strauss and Verdi performed easily and enthusiastically.

It's not like a concert singer, held in the same room last year, will not it, the People's Artist, name, so as not to offend, but painfully this diva and she like, to put it mildly, does not match the content of external executable musical numbers. Two Ekaterin and Tatiana literally captivated listeners by virtuosity and their natural voices, somewhere, even naive, not yet marked by fame and titles, demeanor on stage. Worthy, in a word, the performance of young, apparently promising singers.