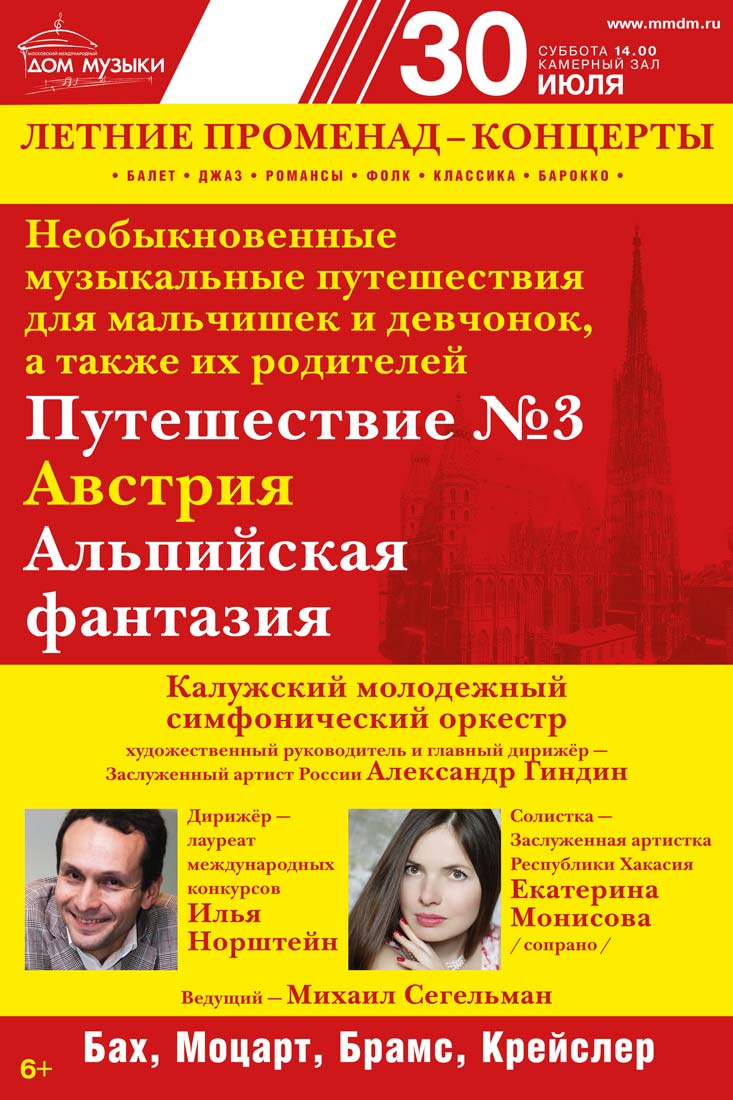 The artistic director and the chief conductor – Alexander Gindin

The conductor is Ilya NORSTEIN

The soloist is Ekaterina MONISOVA

The leader is Mikhail SEGELMAN

Austria stretched at the bottom of the majestic Alps will become the third and last stop on big musical travel for boys and little girls, and also their parents. The multinational Austrian empire sheltered in the borders many people – Hungarians and Czechs, Croats and Serbians who generously shared the inexhaustible folklore wealth with the Austrians.

In the capital of Austria – Vienna – an alloy of musical cultures was shown most brightly, sounds of raznonatsionalny music sounded always and from everywhere, in houses and on streets, in parks and gardens here. Not without reason Vienna was recognized as the musical capital of the world! Many outstanding composers, conductors, performers sought to feel special aura of this city. Some of them, having arrived to Vienna, remained in it forever. You shouldn't forget that Vienna is the city of three Vienna classics: Haydn, Mozart and Beethoven. Till our time even one of houses where in due time there lived Mozart remained, composing the opera "Figaro's Wedding": nowadays this house is the most popular sight of Vienna.

Undoubtedly, on any of the small winding Vienna small streets it is possible to find a trace of great musicians, once here creating. Welcome to musical Vienna on which travel will turn for you into the unforgettable adventure full of the concerning opening!

The musicologist Mikhail Segelman, musicians of the Kaluga symphonic orchestra (the conductor – the winner of the international competitions Ilya Norstein) and the owner of the Grand Prix of the International forum of vocalists in Italy, the honored actress of the Republic of Khakassia, the owner of a crystal lyrical soprano Ekaterina Monisova will become "conductors" on this fascinating musical travel.

In more detail - there.