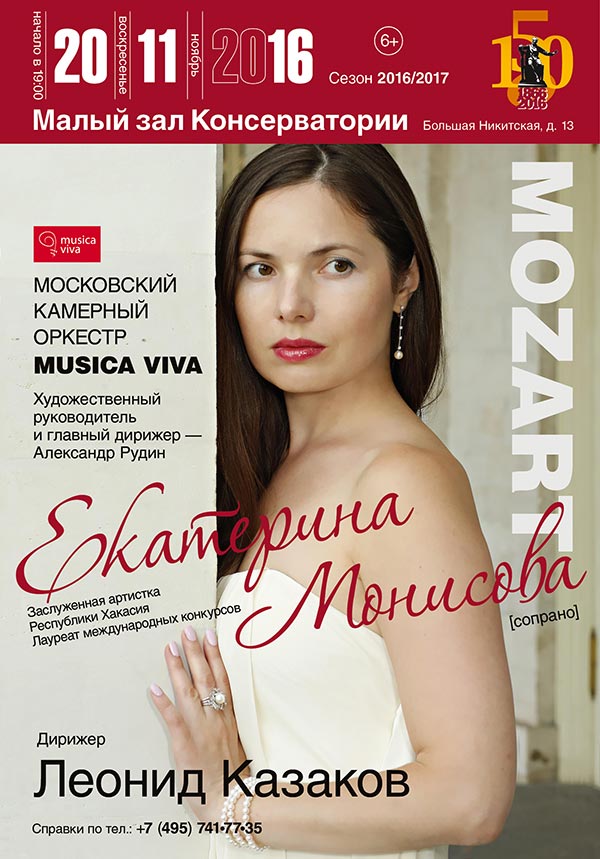 The chamber orchestra "Musica Viva" and a soprano Ekaterina Monisova will perform on November 20 the program consisting only of Wolfgang Amadeus Mozart's compositions on stage of the Small Hall of conservatory.

This year – 260 years since the birth of great Mozart, and will be executed on December 5 225 years from the date of his death.

Music lovers and musicians of the whole world celebrate each date connected with his life: someone writes down and releases disks, someone shoots films, someone defends dissertations, and someone stages his operas. The orchestra "Musica Viva" and the singer Ekaterina Monisova have prepared the refined Mozart monoprogram for these dates, having included in it compositions of different musical genres.

In a concert arias from "Marriage of Figaro", "Tit's Mercy" and Don Juan, the Milan symphony and the Divertissement will be heard.

Ekaterina Monisova (soprano) is the graduate of the Kazan state conservatory in "conducting by the academic chorus" and Gnessin Russian Academy of Music in "opera singing".

Debuted on the theatrical stage in a role Adele in the operetta "Bat" of I. Strauss. In the repertoire of the singer opera parties, chamber vocal music of different styles from baroque to the jazz.

In Ekaterina's biography – the Grand Prix of the International Forum of vocalists in Italy, performances at the Czech Touches of Music festival in Prague, a tour in Italy, Portugal, the Czech Republic, the USA, Russia, participation in the Opera Piccola project and the Washington opera ball under management. In 2010 to the singer the rank of the Honored actress of the Republic of Khakassia is given.

The artistic director and the chief conductor – Alexander Rudin.

The history of orchestra reckons since 1978 when the violinist and the conductor V. Kornachev has based musical ensemble from 9 people, young enthusiasts, recent graduates of the Moscow musical higher education institutions. In 1988 the ensemble which by that moment has grown in orchestra was headed by Alexander Rudin who has thought up the name "Musica Viva" (live music — lat.). Under his management the orchestra has found unique creative role and has reached the high level of mastery, having been among the leading orchestras of Russia. In recent years the orchestra successfully carries out large projects - operas in concert execution, annual "Cello assemblies", a cycle "Silver classics".