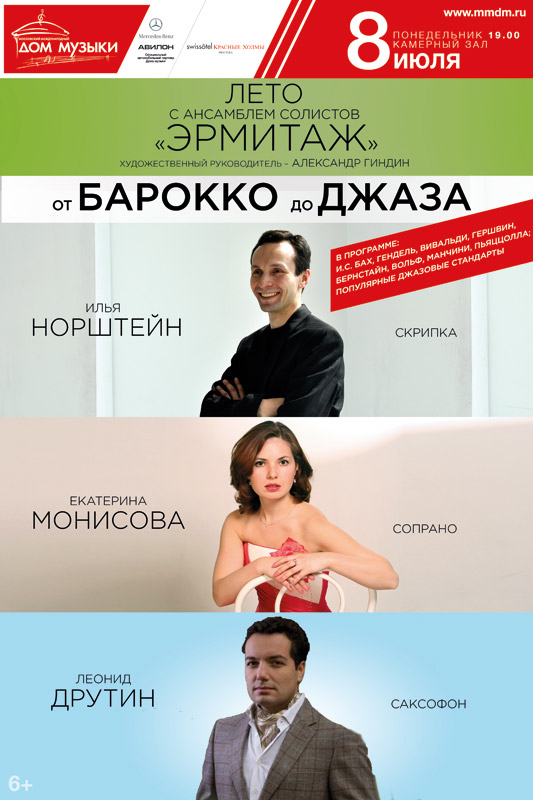 July's concert "Hermitage" consists of an ensemble of soloists and is an unforgettable musical evening full of summer romance in a multi-milllion populated city, steeped away in a long-awaited coolness. The inviting atmosphere of it is filled with a variety of musical genres - ranging from respectable old baroque music to jazz and expressive mellow tango nuevo Piazzolla.

The ensemble of soloists in "Hermitage" is led by Alexander Gindin and is an extravagant mixed program in the style of crossover became the hallmark of summer concerts at the House of Music. The ensemble never ceases to surprise the Moscow public with not only compelling insight into the style of the masters of the Baroque - JS Bach, GF Handel and Vivaldi, but also compositions which fuze the boundaries between classical, jazz and ethnic music.

Along with the violinist, concertmaster Ilya Norshtein - the winner of the international competition of Jeunesses Musicales (Yugoslavia), participant of many Russian and European chamber music festivals - in the concert soloists will participate saxophonist Leonid Drutin - guest soloist State Orchestra of Russia and the NPR, the constant participant of the festival "The Return" and longtime parter of "Hermitage", as well as the young singer Ekaterina Monisova - winner of the Grand Prix of the International Forum of vocalists in Italy, member of the traditional Opera Ball Washington running by Placido Domingo. The repertoire includes not only opera roles and vocal chamber music, but also jazz compositions in which her rare on density and saturation tone soprano draws unexpected strength and expression. Cult tune Summertime by George Gershwin performed by Ekaterina Monisova undoubtedly is going to be one of the main embellishment of the program.