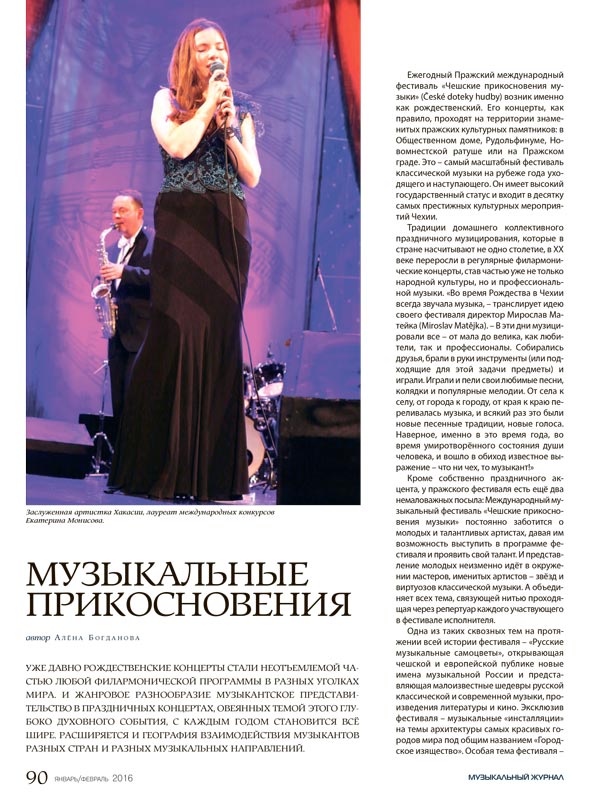 Christmas concerts have long become an integral part of any philharmonic schedule in different parts of the world.

The annual Prague International Festival České doteky hudby (Czech Music Touches) arose precisely as a Christmas event. Its concerts are usually held at the territory of Prague's famous palaces, museums and other architectural monuments such as Obecní dům (the Public house), Rudolfinum, Novoměstská radnice (Guildhall of Nové Město) or Pražský hrad (the Prague Castle). This is the most significant classical music festival at the edge of the outgoing year and coming one. The festival is among the top ten prestigious cultural events of the Czech Republic and has a high state status.

Rather ancient traditions of home festive collective music-making in Czech grew up during the 20th century into a system of regular philharmonic concerts, becoming a part of not only folklore culture but also professional music. «It was always music during the Christmas in the Czech Republic, – transmitted his idea Miroslav Matějka, the festival director. – In those days people played music all – young and old, both amateurs and professionals. Friends gathered together, picked up their musical instruments (or objects suitable for this task) and played. They played and sang their favorite songs, carols and popular tunes. The music flowed from village to village, from town to town, from side to side and every time these were new song traditions, new voices. Probably well-known saying that each Czech had to be a musician came into use at this magical time of year during pacified state of the human soul».

The Prague festival has still two important accents in addition to its actual holiday aspect. České doteky hudby constantly takes care of young gifted artists giving them a chance to show their talents. The presentation of young musicians always occurs in the environment of famous artists – stars and classical music virtuosos. All of them are united by one topic that like a common thread runs through the repertoire of each artist participating in the festival.

Russian music gems as one of such cross-cutting themes throughout the history of the festival traditionally opens new names of Russian performing school and presents little-known masterpieces of Russian classical and contemporary music, literature and cinema to Czech and European public. City elegance is another exclusive direction of the festival to produce original musical ‘installations’ on the subject of architecture of the most beautiful cities in the world. Film music concerts formed one more very special trend and as for the last festival it was Oscar-winning movies music. Music for children was an important festival topic right along, this time the famous symphonic suite Peter and the Wolf by Prokofiev. And, of course, it’s quite natural that a mandatory part of the project is always music of Smetana, Dvořák, Janáček and Martinů. Virtuoso violinists Miroslav Ambroš and Jan Mráček as well as brilliant pianist Lukáš Klánský were among bright young Czech artists of new generation performed at the festival while Russian performing art was represented by soprano Ekaterina Monisova in the singular.