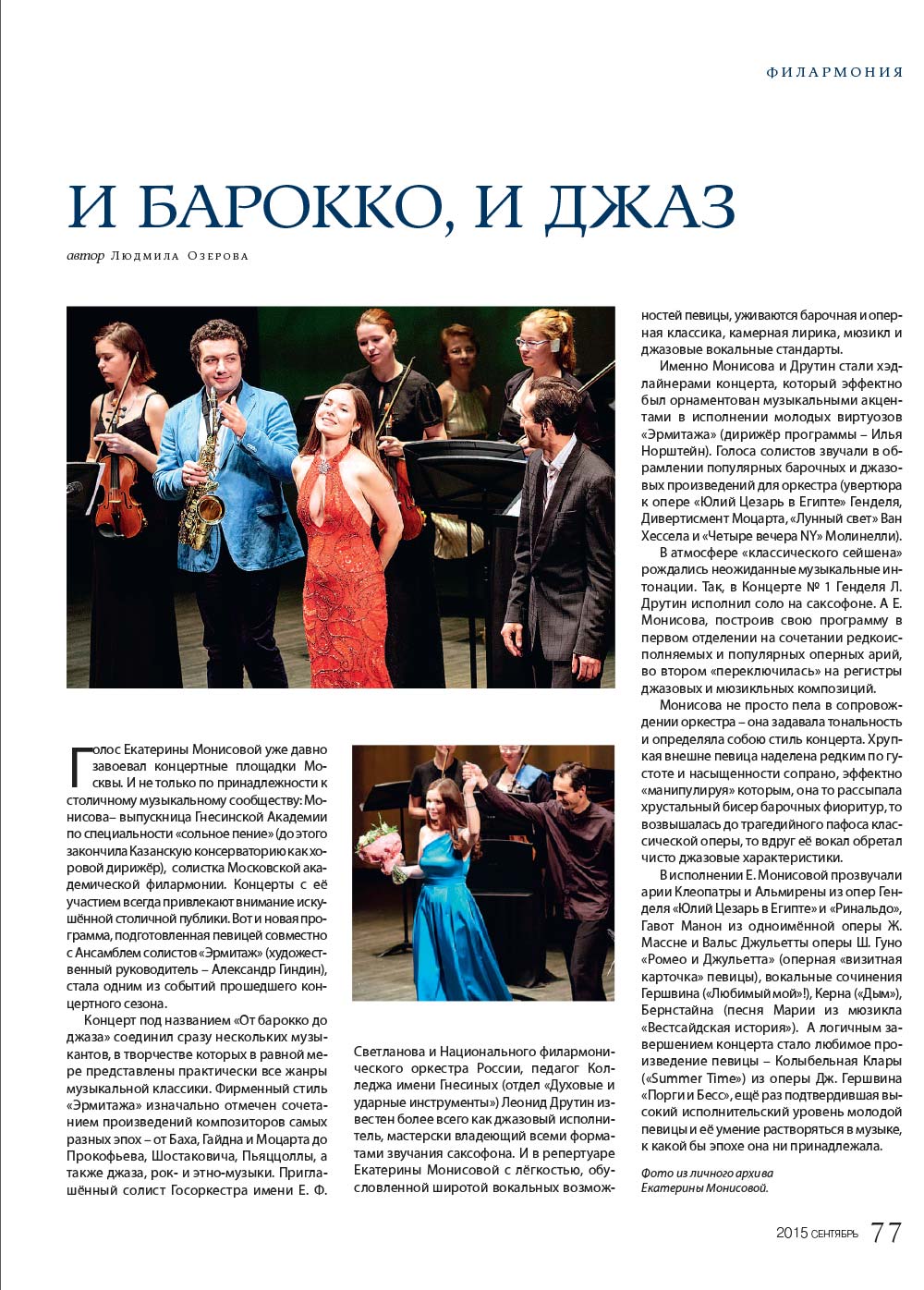 Ekaterina Monisovoy’s voice has long captivated the concert halls of Moscow. And not only by belonging to the capital's musical community: Monisova is the Gnessin Academy graduate

of specialty "solo singing" (previously she graduated from the Kazan Conservatory as choral Conductor), the soloist of The Moscow Philharmonic Society.

Concerts with her participation have always attracted the attention of the discerning metropolitan public. That a new program, prepared by the singer in collaboration with the ensemble of soloists "Hermitage" (Gov. artistic director - Alexander Gindin), it was one of the events of the last concert season.

The concert entitled "From Baroque to Jazz" joined several musicians, whose work equally represented almost all genres of classical music. Corporate Identity of "Hermitage" was originally recorded by a combination of works by composers of different eras - from Bach, Haydn and Mozart to Prokofiev, Shostakovich, Piazzolla, as well as jazz, rock and ethnic music.

Guest soloist of the State Orchestra named after E. F. Svetlanova and the National Philharmonic Orchestra of Russia, teacher of The Gnessin College (Department of "Wind and percussion instruments") Leonid Drutin known above all as a jazz singer, masterfully knows all the saxophone's formats sound. And in the Ekaterina Monisovoy's repertoire easily due to the breadth of the vocal capabilities of singer, get on baroque and classical opera, chamber lyrics, musical and vocal jazz standards.

It was Monisova and Drutin who headlined the concert, which was drammatically adorned by music accents performed by young virtuosos of "Hermitage" (conductor of the program wasIlya Norstein). The voices of soloists were framed by popular baroque and jazz pieces for orchestra (the overture to the opera "Julius Caesar in Egypt" by Handel, Mozart's Divertimento, "Moonlight" Van Hessel and "Four pictures from New York" Molinelli).

Unexpected musical intonations were born in the atmosphere of a "classical session". So, in the Concerto No 1 Handel L. Drutin she performed a solo on the saxophone. And E. Monisova by building her program in the first part on the combination of rarely performed and popular opera arias, in the second part she "switched" to jazz registers and musical compositions.

Monisova didn't simply sing accompanied by the orchestra she set the tone that determined the style of the concert. Visually delicate singer is endowed with a rare appearance on the density and saturation soprano, effectively "manipulating" it, she scattered crystal beads of the baroque grace, then rose to the tragic pathos of classical opera, suddenly took on its pure jazz vocal performance.

E. Monisova performed arias Cleopatra and Almira from Handel's operas "Julius Caesar in Egypt" and "Rinaldo" Gavotte Manon of Massenet's opera of the same name, and Juliet's Waltz Gounod opera "Romeo and Juliet" (opera "calling card" of the singer), vocal compositions by Gershwin ("My love!"), Kern ("Smoke"), Bernstein (Mary's song from the musical "West Side Story"). A logical conclusion of the concert was the favorite work of the singer - Lullaby of Clara («Summer Time») from the opera J. Gershwin's "Porgy and Bess", once again confirmed the high level of performance of the young singer and her ability to excel in music, no matter what era it belongs to.