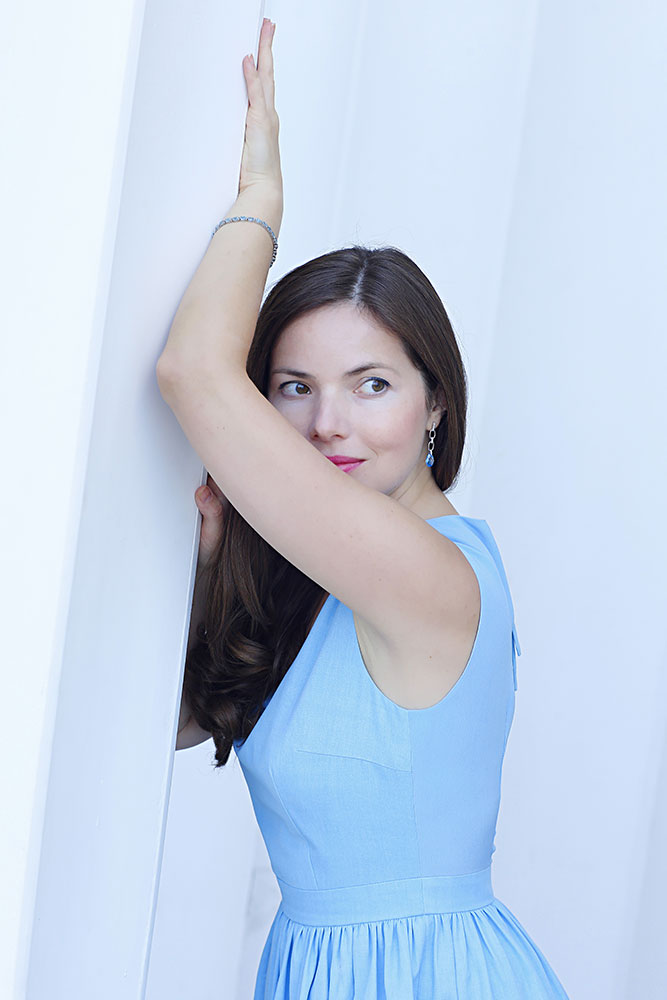 This year at the Festival "Czech Touches of Music", the public will be able to hear a single guest from Russia, that is Ekaterina Monisova, the owner of the crystal lyric soprano. Christmas concert with her participation will take place on December 25th on the stage of the Academy of Fine Arts. Ekaterina Monisova, the soloist of the Moscow Philharmonic, the winner of the Grand Prix of the International Forum of Vocalists in Italy (2010), gained fame as a role performer of the Snow Maiden in the cognominal opera by Rimsky-Korsakov, Violetta in "La Traviata" by Verdi, Juliet in "Romeo and Juliet" by Gounod, Mimi and Musetta in "La Boheme" by Puccini. At the same time, she is a baroque and romantic music performer along with jazz melodies by George Gershwin, Glenn Miller, Jerome Kern.These stylistic contrasts perfectly reveal all the facets of her talent. On the Festival Eve, we will introduce the singer to readers.

— Ekaterina, you had two paths of fate, as a choir director and opera singer. Please tell us how true calling won.

— My mother always wanted me to become a choir director, so I entered the Choral & Conducting Faculty of the Kazan State Conservatory. I wanted to study at both conductor and vocal faculties, but it was impossible because of the competitive relationship between faculties. After graduating from the conservatory, I went to the Siberian town of Abakan, where I taught at the Art Institute and established my own Academic Choir. But I still was eager to realize myself through the voice, not to depend on the choir, but from my own instrument. A voice is the most unique and fragile instrument, because in real you are to sing by your soul, not the throat. I started to solo more and more often with the orchestra of Khakassia Philharmonic, and parallel study on the Vocal Faculty of the Gnesins Russian Academy of Music.

—You are one of those who won all hearts in Moscow. How was it?

— After graduating from the Gnesins Russian Academy of Music, I was invited to wiz with the famous ensemble "Excelente". So I stayed in Moscow and now are wizzing solo programs in the best halls of the capital, such as Kremlin Armoury, the Chamber Hall of the Moscow House of Music, Small Hall of the Moscow Conservatory. Creative people's success much depends on luck, chance. They even say that success is 50% of luck and 50% of everything else, that are labor, talent, charm ... maybe something else.

— You sing with an orchestra, organ, piano. What do you prefer the most?

— I love to act accompanied by both piano and orchestra, organ as well, depending on what I sing. If it's old music by Bach and Handel, then I'd better prefer to sing with the organ; if I sing a romance, of course, I should be accompanied by the piano. I can sing everything with the orchestra, but I prefer arias the most. Two concerts are soon coming in Moscow, in the Variety Theatre and Conservatory with popular jazz compositions accompanied by a jazz band.

— Do you have any vocal idols of the modern opera world?

— Of course, I listen to famous singers, who are distinguished by their unique timbre of voice, charisma. Learning from the great masters such as Mirella Freni, Maria Callas, I'm not trying to copy and imitate them, and strive to have my own face in the performance and develop my own interpretation in music.

— Which Czech composers and musicians are you interested in?

— In the conservatory, I conducted the choir of Janacek and Smetana, but my love is given to Dvorzhak for his famous opera "Rusalka". Of course, I love singing the Rusalka's aria.

— You are preparing to perform in Prague with a Christmas concert. Are you preparing some surprise for Prague public?

— The concert is planned in the framework of the International Music Festival "Czech Touches of Music" with an orchestra of the South Czech Philharmonic and a conductor Leos Swarovski. The event will take place in Prague on December 25 at the Palace of the Lichtenstein.

— How did you become a participant of the Festival "Czech Touches of Music"?

— I'm very lucky that I have been recommended to the festival by my Czech friends.  The Russian Word Magazine is a partner of the Festival "Czech Touches of Music".